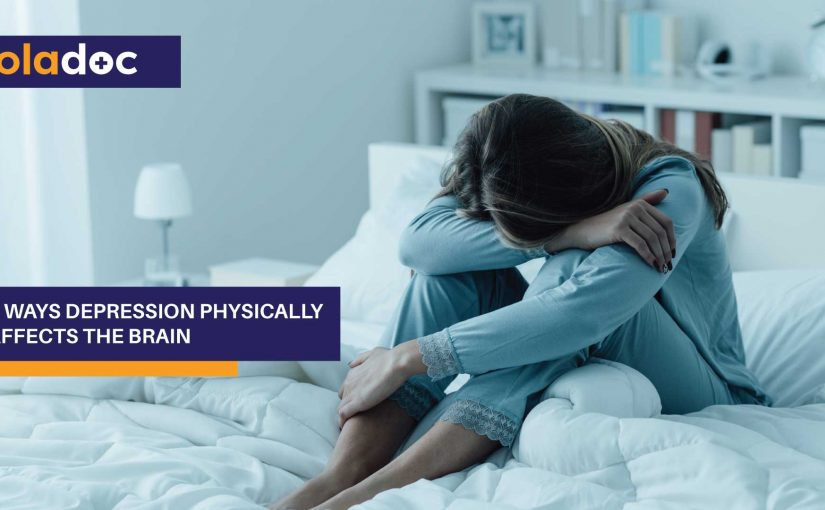 The psychological and emotional effects of depression are well-known and well-documented. However, a large number of studies in the past years have now proven that chronic depression directly impacts the nervous system and can cause physical brain damage; even altering its structure.

Consult a psychologist if you have clinical depression.

But before we delve into the very real physical effects of depression on our brains, let’s have a look at the key brain areas that are most commonly affected by depression:

According to a recent study published in the Journal of Neurotransmission, people who experience chronic depression, ranging from a few months to years, have displayed sizable shrinkage in one or more of the following brain areas:

The amount of shrinkage is directly related to the duration and severity of depression. However, these changes usually start occurring after 8 months of chronic depression, either as a single continued bout or multiple shorter episodes.

As a result of this shrinkage, the functions associated with the affected area are also diminished. For instance, shrinkage in the amygdala and prefrontal cortex can lead to reduced empathy in women with Post-Partum Depression (PDD) following pregnancy.

While a certain amount of depression is a necessary defense against illnesses and aiding in bodily repair after an injury, excess inflammation in the brain can contribute towards the early development of Alzheimer’s and Parkinson’s. In fact, a recent study established a link between long-term depression and neural inflammation. It stated that people with chronic depression of over 10 years had 30% more inflammation than those depressed for a shorter time.

Not only does this inflammation cause shrinkage by killing brain cells, but also disrupts bodily functions by decreasing neurotransmitter function (chemicals responsible for brain/body communication). Another side-effect of brain cell death via inflammation is reduced neuroplasticity (the brain’s ability to change with age), which can impair learning, memory, mood, and brain development.

Increase in shallow breathing due to depression deprives the body, and brain, of the necessary amount of oxygen, resulting in a phenomenon known as ‘brain hypoxia’. While short-term hypoxia, like after being underwater for too long or sudden changes in altitude, generally only cause confusion, depression-induced hypoxia contributes towards inflammation, which, as mentioned above, causes brain cell injury and death in the long-term.

4-Changes in Structure and Connections:

The brain constantly develops new connections with each new piece of information acquired; this is how it retains its plasticity, protects the cells from aging, and keeps neurodegenerative conditions like Alzheimer’s at bay.

However, prolonged depression interferes with the connection-making process and even changes the physical structure of the affected areas to reduce their functionality. Although, like inflammation, these changes require at least 8 months of depression to start developing.

The effects of these structural and connective changes on the hippocampus, amygdala, and prefrontal cortex include memory impairment, severe imbalances in mood and emotional regulation, and disorientation and problems with focus, respectively.

The physical evidence provided above proves that depression isn’t just an ignorable emotional problem as most people perceive it to. If left untreated, chronic depression also possesses the tendency to cause serious brain damage.

So, don’t be afraid to reach out to a certified mental health specialist to aid you in restoring your mental and physical well-being.

You can also book an appointment with a top Psychologist in Lahore, Karachi and Islamabad through oladoc.com, or call our helpline at 042-3890-0939 for assistance to find the RIGHT Doctor for your mental health concerns.

Ms. Fariha Naz - Author Miss. Fariha Naz is a Psychologist practicing in Lahore. Miss. Fariha Naz has the following degree: MS (Clinical & Counseling Psychology) and has 5 years of experience. She thinks awareness is the key in handling any mental health problem and thus loves to write about it. You can book an appointment with her by pressing the "Book appointment" button.
« 9 Health Benefits of a Caffeine-Free Lifestyle
8 Best Foot Care Tips for Peripheral Arterial Disease »
Book Appointment with the best "Neurologists"