5 Common Als Myths-and the Truth Behind Them 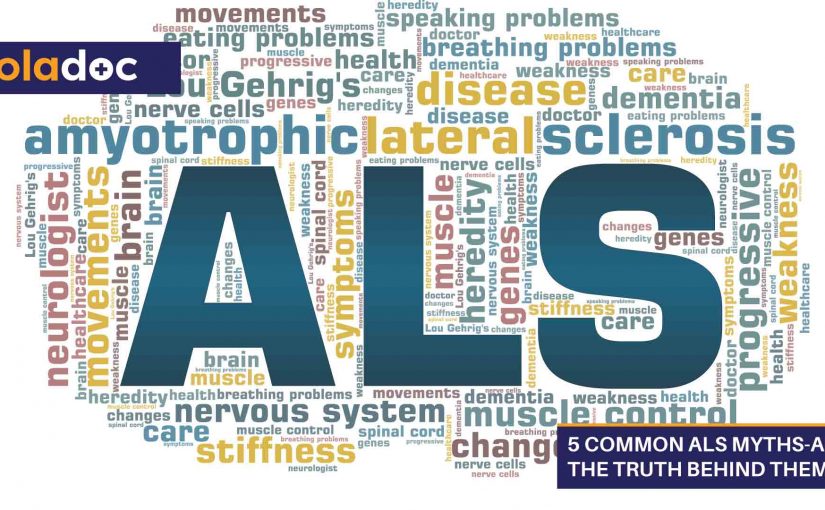 Amyotrophic Lateral Sclerosis or ALS, a neurodegenerative condition that gradually inhibits voluntary function by destroying nerve cells in the brain, is slowly receiving worldwide recognition. However, like all neural conditions, ALS is also surrounded by its fair share of controversies. Here we will help dispel some common myths related to the condition:

Gradual loss of voluntary function like speech, breathing and movement of the arms and legs is the defining factor of ALS and is common in every case. However, nearly 20-30% of those diagnosed with ALS develop mild cognitive impairment like memory and concentration issues, as well as Frontotemporal Degeneration (FTD) over time. Moreover, some people may also develop ALS-Parkinsonism Dementia Complex (LAS-PDC) in which loss of brain function, particularly thinking and intelligence, accompanies classic ALS symptoms.

2- ALS is Caused by Lyme Disease and Other Infections:

ALS is not contagious or infectious. While it does share symptoms with the bacterial tick-induced infection, like muscle weakness, twitches, and fatigue, and many people diagnosed with ALS also test positive for Lyme disease, it is only a misconception that often leads to a misdiagnosis. ALS is only either genetic or sporadic (occurring randomly without cause), with the latter resulting from the presence of a defective gene C9orf72 in most cases.

3- It Only Runs In The Family:

While having a parent with ALS does increase each offspring’s chances of developing ALS by 50%, this is true for only 5-10% of the cases; some with an ALS-positive lineage may not develop the condition at all. The remaining 90% of those diagnosed with ALS are ‘sporadic’, i.e. without a known cause as stated above.

4- You Can’t Feel Your Body After ALS Paralysis:

5- It Only Affects Old People:

This misconception stems from the idea that neural degeneration, like in dementia or Parkinson’s, is a common ailment among the aging population. The fact that ALS generally affects people between 40 and 70 only serves to cement the belief. However, nearly 10% of those diagnosed are under 45 with ‘Young-Onset ALS’. Also, the most popular figures with ALS, namely American baseball player Lou Gehrig and Physicist Stephen Hawking were diagnosed at ages 38 and 21, respectively.

Early signs of ALS may be difficult to notice due to their subtlety and relatively slow development. However, staying aware and informed and getting regular physical exams can help with early detection and subsequent life extension. See your doctor if you observe any signs of the condition in yourself or a loved one.

You can also book an appointment with a top Neurologist in Lahore, Karachi and Islamabad through oladoc.com, or call our helpline at 042-3890-0939 for assistance to find the RIGHT Doctor for your neural concerns.