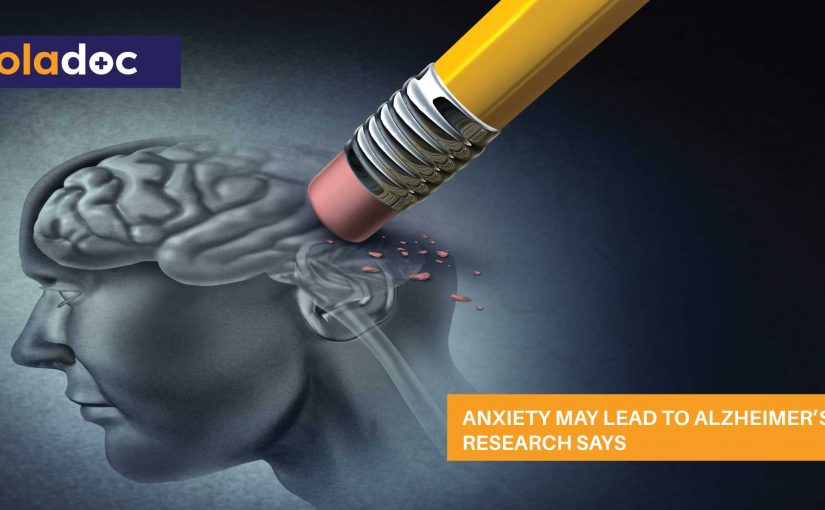 Spontaneous panic attacks, perpetual stress, a rapid heartbeat, profuse sweating, and unrealistic worries are only some of the things that a person with anxiety disorder suffers through nearly every day. In 2016, anxiety disorders affected 275 million people worldwide, and the numbers are only rising.

And if anxiety itself weren’t enough, new research suggests that older adults with anxiety are more likely to develop Alzheimer’s. Visit a neurologist for an alzheimer’s diagnosis.

Alzheimer’s is a dementia variant that is defined by behavioral changes and progressively severe memory and thinking issues. Alzheimer’s is one of the more serious neurodegenerative conditions affecting the aging population, particularly due to the lack of targeted treatment and early diagnostic tools/tests.

However, high levels of the protein ‘beta-amyloid’, which forms plaques that block nerve cell communication within the brain, have been observed in people with Alzheimer’s. This has led to the conclusion that beta-amyloids are a major contributing factor behind Alzheimer’s development.

Moreover, scientists have also observed that a majority of people with Alzheimer’s also display signs of chronic depression.

To determine the exact link between anxiety, beta-amyloids, and Alzheimer’s, researchers from the Brigham and Women’s Hospital, Boston, Massachusetts observed 270 cognitively healthy adults between 62-90 over 5 years.

At the start of the study, participants underwent a baseline PET (Positron Emission Tomography) scan for a detailed initial image of their brains. This was followed by annual follow-up assessments to check the progression of depression and anxiety symptoms using the 30-item Geriatric Depression Scale (GDS).

Upon concluding the 5-year study, researchers observed higher beta-amyloid levels in participants who displayed a steady progression of anxiety symptoms, as compared to their initial baseline scans.

This establishes an indirect link between anxiety and Alzheimer’s, i.e. increase in anxiety symptoms leads to a rise in beta-amyloid levels, which may then contribute towards Alzheimer’s development at a faster rate.

However, this does not necessarily mean that everyone with an anxiety disorder will on to develop Alzheimer’s disease later in life. Instead, it only increases the risk, which can be greatly reduced through self-care and/or proper medical assistance for anxiety management.

Detailed findings have been published in the American Journal of Psychiatry.

While further large-scale trials need to be conducted for conclusive evidence of anxiety’s direct relationship with Alzheimer’s, this study provides a solid basis for future research on anxiety screening as a viable test for early diagnosis of Alzheimer’s.

This is particularly important as even mild symptoms generally take over a decade to surface, by which time significant and irreversible neurodegenerative damage has already occurred. Moreover, specialized anxiety testing will not only help with early detection and slowing down disease progression, but also help prevent the condition entirely.

While it may not be a definitive diagnosis on its own, when combined with multiple risk factor identification and measurement, anxiety screening possesses the potential for early diagnosis.

Increased Alzheimer’s risk aside, anxiety, like all other mental health conditions, should be managed properly and promptly to make sure that it does not grow to interfere with daily life quality.

You can also book an appointment with a top neurologist in Lahore, Karachi and Islamabad or call our helpline at 042-3890-0939 for assistance to find the RIGHT Doctor for your mental health concerns.

Dr. Zahid Rustam - Author Col. (R) Dr. Zahid Rustam is among the Best Rehab Medicines in Islamabad. Dr. Zahid Rustam completed his MBBS from Army Medical College and pursued his further education in the UK and USA. Recently, Dr. Zahid has Earned qualification of FIPP WIP USA which is the only recognised Post graduation degree in Interventional pain practice. He is one of only 6 physician in pakistan to earn this Degree. Dr. Zahid Rustam has vast years experience of managing patients with diverse illnesses.
« 7 Ways to Get Through an Identity Crisis
Bleeding During Pregnancy: What’s Normal, What’s Not? »
Book Appointment with the best "Neurologists"