Home » Trending » Smog in Lahore on the Rise: Declared World’s Most Polluted City

Smog in Lahore on the Rise: Declared World’s Most Polluted City 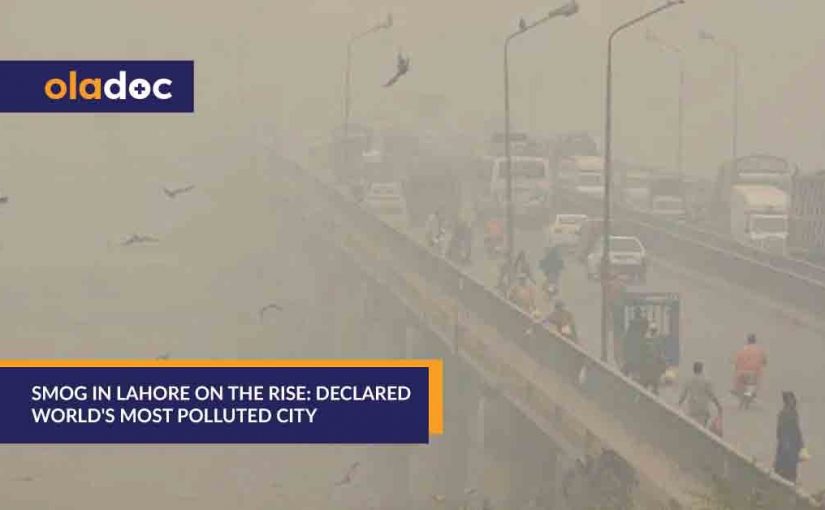 Smog in Lahore, Pakistan is on the rise once again. On Monday, November 1, 2021, Lahore topped the list of Air Quality and Pollution with hazardous AQI (Air Quality Index) levels going as high as 397!

Air pollution is something that has always been a cause of grave concern in Lahore. Moreover, the city has faced the problem of smog for the past 5 years. Now with the start of the winter season, the smog levels are already soaring beyond the safe mark which could be detrimental to the health of Pakistani citizens.

A concerned Pakistani on Twitter said this about Lahore’s poor air quality:

The official air quality of Lahore on Monday between 9 am – 5 pm stood at 289 whereas, international monitoring bodies reported it at 397. That is way higher than the normal air quality level recommended by the World Health Organization (WHO).

Here’s a snapshot of the AQI index taken on Monday showing Lahore at the top of the list for poor air quality, with Delhi taking the second spot

The Air Quality Index reached extremely unsafe levels for Lahore as smog engulfed various parts of the city. Smog is a term used to describe a mixture of “smoke” and “fog” exposure to which is bad for the lungs as well as the heart.

This is the current level of Air Quality reported by various sources on Tuesday, November 2, 2021.

What do the experts say?

Mr. Abdul Rauf, who represents an organization closely familiar with air quality in the city stated:

“At 397 AQI, [or particulate matter (PM) 2.5], the pollution concentration is 34.8 times higher than the annual air quality value set by the World Health Organisation. This is, what environmentalists call, hazardous with it getting ‘extremely hazardous’ at individual points.”

According to pulmonologists, exposure to smog can be dangerous especially for people who suffer from chest problems like asthma. Citizens are advised to wear masks and sunglasses and avoid going out unnecessarily in smog season.

What are the possible dangers of smog in Lahore?

Being exposed to smog can lead to various health problems like:

Smog in Lahore is a growing concern so it is pertinent that we all must take the necessary precautions against it and protect ourselves from excessive exposure to it. By following preventive measures we can stay safe amidst the smog season and avoid being affected by serious health conditions.

Disclaimer: The contents of this article are intended to raise awareness about common health issues and should not be viewed as sound medical advice for your specific condition. You should always consult with a licensed medical practitioner prior to following any suggestions outlined in this article or adopting any treatment protocol based on the contents of this article.
« Aloo Bukhara Benefits: 9 Incredible Reasons to Eat Plums
How to Get Glowing Skin: 8 Wonderful Tips You Can Try at Home »
Book Appointment with the best "General Physicians"