Home » Pregnancy » The Struggle Is Real: 5 Tips To Get Pregnant

The Struggle Is Real: 5 Tips To Get Pregnant 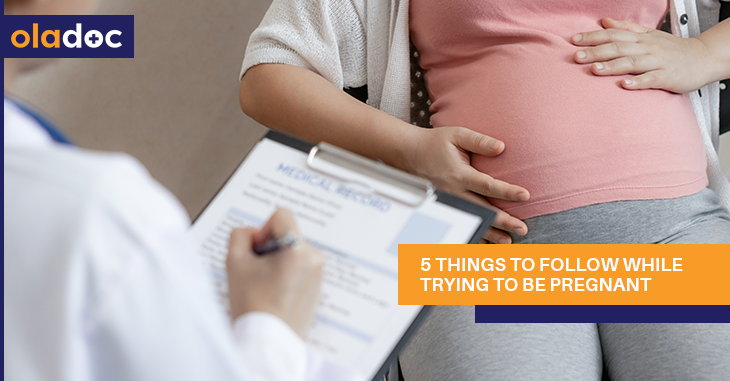 Sometimes, pregnancy is all but an accident. Other times, people actively plan out their babies. While most women who are trying to have a baby will get pregnant in the first year, however, others might need to make a few changes in their lifestyles to have an easier time conceiving.

Following are the top 5 tips to get pregnant:

Keep track of your cycle

Of the top tips to get pregnant is keeping track of the cycle. It is important to have sex during the ovulation period to maximize the chances of getting pregnant. There are many applications that can help women figure out their ovulation window. Similarly, ovulation kits are also available that can be helpful in finding the opportune time when the egg is ripe.

There are somewhat natural indicators of ovulation as well, as the body temperature. The basal temperature decreases just before ovulation and then increases after it. Similarly, cervical mucus is another pointer of the fertile time. It comes more slippery and thin just around the fertile period.

It is best to start a few days before and after the 24 hours of ovulation to make up for the uncertainties. Trying during this fertile window is best, as it increases the probability of conception.

Get a preconception checkup

For parents trying to get pregnant, it is very important to visit the doctor prior to trying to have the baby. It is vital to take certain supplements like folic acid before pregnancy as the deficiency can lead to birth defects like spina bifida. Similarly, if the mother is malnourished, her health can suffer during and after the baby.

Furthermore, for couples with a history of a medical condition and genetic disorders, it is very important to contact the doctor and get their opinions as well.

The weight of the mother is important

Having a normal BMI is especially important for women who are trying to have a baby. Both being over and under-weight is just as bad for the odds of conception. According to experts, obese women have twice as hard in getting pregnant, and under-weight women are 4-times as likely to not conceive.

Women who are obese are very likely to have infertility. Being over-weight interferes with the hormonal cycle, which also makes getting pregnant difficult. Furthermore, obese women are also more liable to have miscarriages. Even fertility treatments have a lower success rate for obese women. The complications also follow-through during and after pregnancy as well. Hence, it is best to lose weight before trying to have a baby.

Likewise, being underweight is just as unhelpful. Women who are very skinny run the danger of inconsistent hormonal cycle and at times its severe enough to cause infertility. Hence, weighing right is amongst the important tips to get pregnant.

Dietary habits play a chief role in maternal health. It is important for women to be stocked up on the vital nutrients to sustain them through the entire journey. Moreover, calcium plays an essential part in boosting fertility and thus makes conceiving easier. Likewise, iron also increases the likelihood of getting pregnant and also is very much necessary during pregnancy as well.

Cutting down on caffeine is also significant. Too much coffee and tea indulgence can result in lowered fertility, so going decaf is perhaps a better option.

Not only are smoking and drinking not conducive for health in general, but are also very bad for those women, and men, who are trying to have a baby. It makes it harder for the couple to have conceived, as the fertility problems spike.

The cigarette smoke causes the quality of the hormones to decline. This consequently jeopardizes the quality of the eggs and sperm. Moreover, smoking makes it harder for men to have erections. In women, smoking also interferes with the hormonal cycle, which makes planning out pregnancy very difficult as one does not know the precise ovulation window.

Furthermore, cigarettes also mutate the DNA of the sperm, which runs all sorts of dangers. According to research, the babies of the men who smoke have greater chances of getting leukemia. Not just fathers, but mothers who smoke also endanger the safety of the babies.

Babies born to smoking mothers are more likely to be premature and suffer from birth defects as well. Ectopic pregnancies are also more common amongst the women who smoke.  So, even if the smoking couple is able to conceive, they risk the safety of their baby.

Therefore, one of the most important tips to get pregnant and have a healthy baby is to quit smoking. For men, as the sperm matures out of 3 months, hence, anyone planning baby needs to quit the nasty habit of smoking accordingly then.

Alcohol has a similar impact on the quality of the hormones and the health of the baby. Couples who drink have a hard time conceiving. Alcohol increases the probability for men to suffer from erectile dysfunction and decreased sperm quality. Moreover, the dangers that run amok with drinking during pregnancy include; miscarriage, stillbirth, brain disorders, etc.

While exercise is important, strenuous exercise makes getting pregnant difficult. Hence, it is best to change the physical activity scale and practice.

Making small efforts can make getting pregnant easier and prepare people better for what lies ahead of them.  If after enough efforts you are still not able to get pregnant, it is important to consult with an infertility specialist. You can book an appointment with a top infertility specialist or gynecologist in Lahore, Karachi, and Islamabad via oladoc.com or by calling at 042-38900939.

Book Appointment with the best "Gynecologists"

Should Pregnant Women Fast During Ramadan?