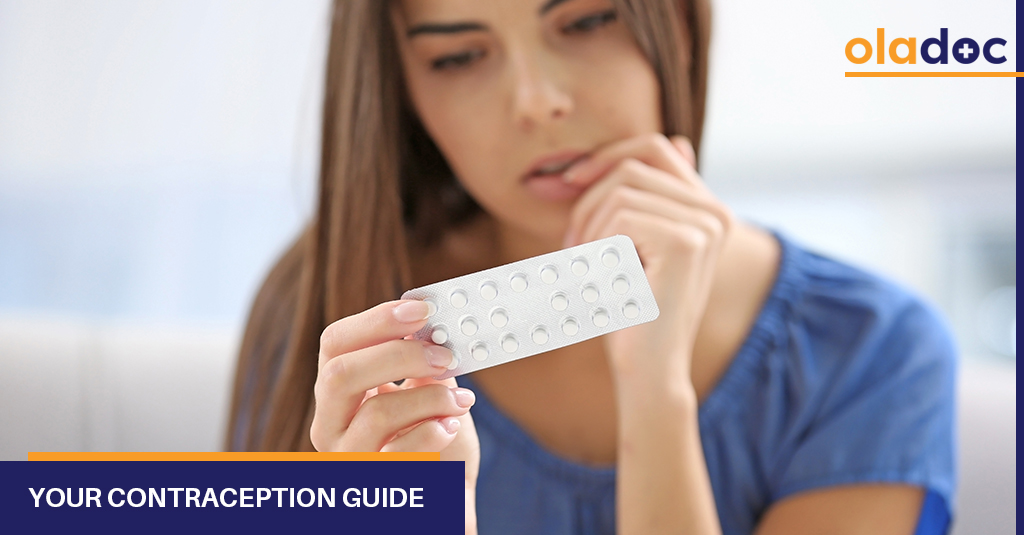 A pregnancy occurs when a male sperm enters the female uterus to fertilize the egg present there. Contraception prevents this process by either stopping the combined sperm and egg from attaching to the uterus’ lining for further development, keeping the egg and sperm apart, or stopping egg production altogether. It can also help prevent STIs. Consult a gynecologist for the right contraception for you.

Here we look at some of the better-known contraceptive options; from temporary barrier methods to permanent surgeries:

Made of rubber/latex and worn over the penis’ tip right before intercourse, condoms keep the sperm from entering the uterus during ejaculation. While they are pre-lubricated, additional water-based lubricants can be applied to prevent chafing and discomfort. However, it must be held in place during intercourse and until after ejaculation to prevent it from coming off and effectively keep semen from leaking into the vagina.

People sensitive to latex can opt for polyisoprene or polyurethane condoms. However, avoid spermicide-lubricated (sperm-killing) condoms, as they increase the risk of developing STIs. Moreover, always use a new condom after every ejaculation or if the previous condom was put on incorrectly, and never use expired condoms. Condoms may not be suitable for men who have difficulty maintaining an erection. Male condoms have a high success rate of 98%.

Female condoms are worn inside the vagina to prevent sperm and egg contact and are also used once per ejaculation. Made of polyurethane, female condoms are less effective than male condoms (95%), despite their similar structure and function because they may not fit properly and are often pushed farther back into the vagina. However, they can still be easily retrieved.

Moreover, they are difficult to use, less-widely available, and more expensive than male condoms. They may also not be suitable for women who are uncomfortable touching their genitals.

Note:Condoms are the only contraceptives that provide STI protection.

These reusable, circular domes made of soft silicone are inserted into the vagina right before intercourse to bar sperm entry into the uterus. Diaphragms or caps are used alongside a spermicide gel to kill any sperms that come in contact with the barrier. Extra spermicide may have to be applied if the cap is placed 3 hours before intercourse or is reused. However, the diaphragm or cap must not be taken out to re-apply spermicide.

Unlike condoms, they must be left on for at least 6 hours after intercourse for full effect and require a medical consultation for the proper size fitting. Re-sizing may be required after a pregnancy, miscarriage, or abortion, or for a weight loss or gain of more than 3 kg.

Some people may be unable to use barrier contraception due to allergies or personal discomfort at touching one’s genitals. In such cases, some women may opt for contraception via tracking their fertility (menstrual) cycle to determine days when they are unlikely to become pregnant. Conversely, it can help in conceiving successfully. However, it requires lengthy and diligent observations. Fertility tracking can be done in 3 ways:

Vasectomies are a permanent, near-irreversible form of male contraception. The procedure generally involves surgically cutting and sealing the sperm carrying tubes (vas deferens) located in the scrotum. Sperm production gradually stops after 8-12 weeks, until which time additional contraception is required during intercourse, eventually resulting in a sperm-free semen. You can learn more about vasectomies here.

The female version of a vasectomy, a tubal ligation involves blocking the eggs’ entry to the uterus by surgically cutting or clamping shut and sealing the fallopian tubes (egg transport canals) using silicone rings. Eggs continue to be produced, but are absorbed back into the body.

In rare cases, a ligation may cause internal bleeding, infection, or organ damage. However, the tubes may have to be completely removed in some cases if they rejoin (salpingectomy).

This non-surgical form of female sterilization involves placing a soft, flexible, insert into both fallopian tubes using a thread inserted via the vagina. This causes scar tissue to form around the inserts over 3 months, which then effectively blocks the tubes.

Aside from surgical sterilization, all of the above forms of contraception require consistency and diligence for effective, long-term results. There are numerous other longer-lasting contraceptives that work by hormone manipulation . If you are considering contraception, consult with your doctor on the best option for according to your health. You can also book an appointment with a top Gynecologist in Lahore, Karachi and Islamabad through oladoc.com, or call our helpline at 042-3890-0939 for assistance to find the RIGHT Doctor for your sexual health concerns.

Dr. Aniqa Kanwal - Author Dr. Aniqa Kanwal is a Gynecologist practicing in Lahore. Dr. Aniqa Kanwal has the following degrees: M.B.B.S., M.C.P.S. and has 13 years of experience.She is a big proponent of female health and likes to write about it as well.
« 8 Best Natural Moisturizers for Dry Skin
4 Snacks That Seem Healthy but Actually Aren’t »

The Different Ways Asthma is Triggered and How You…