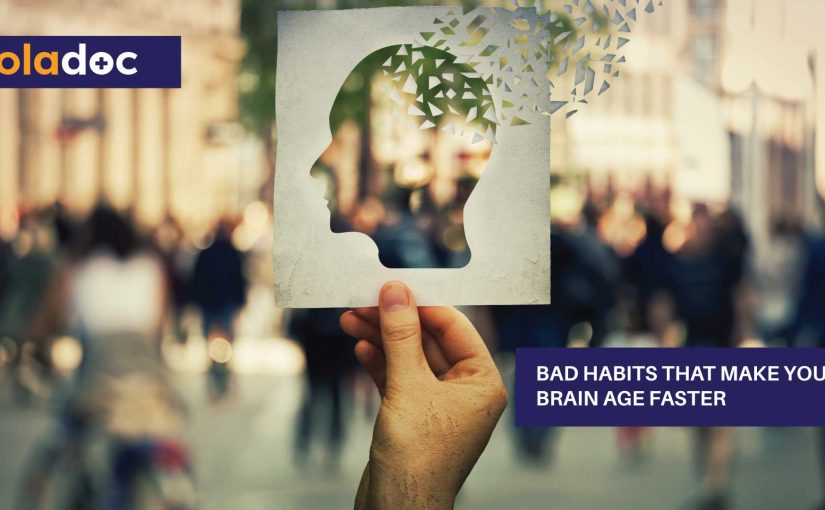 While some people are sharp as a tack well into their 90s, others start struggling with mental clarity much earlier. Even though this is due to genetic predispositions in part, some lifestyle factors also influence how your brain ages. No one has control direct control over their genes, but you can avoid the following bad habits that age your brain faster:

1- You Are Not Physically Active:

The truth is that normal aging results in brain changes that slow down cognitive function. For instance, the interaction between neurons may decrease, some brain regions may shrink, inflammation may increase, and the blood flow in the brain could decrease. However, some daily habits may accelerate brain aging. Luckily, some habits that are beneficial for your overall health are also good for cognition. For instance, physical activity can be helpful for the brain. Physical activity may help prevent Alzheimer’s disease and improves memory as you age. Physical activities such as aerobics may also strengthen neuronal connections and improve cerebral blood flow. Exercise also improves sleep and reduces anxiety and stress indirectly, which prevents cognitive impairment.

2- You Are Not Protecting Your Hearing:

There is a connection between hearing loss and dementia. Senior citizens with hearing loss are more susceptible to dementia. One possible reason behind that is that the brain has to struggle to hear and this overburdens it. Moreover, hearing loss is linked to social isolation, which is a risk factor for dementia. If you notice any signs of hearing loss, see your doctor right away.

3- You Don’t Wear a Helmet While Cycling:

According to recent research, the severity of a traumatic brain injury (TBI) and the age at which it happens can affect the risk of dementia. People who have a history of TBI are more susceptible to dementia. In fact according to some studies those people who have had head injuries had brains that were five years older than those that didn’t. The more severe the injury, the faster the brain seemed to age. Therefore, it is recommended that you wear a helmet while skiing or cycling as a way to prevent these potential risk factors for TBI.

4- All Your Free Time Is Spent in Front of the TV:

Cognitive training programs can reduce the risk of dementia. Challenging your mind by reading or with Sudoku puzzles and crosswords can help prevent conditions like Alzheimer’s disease. Television has been linked to brain and cognitive decline in a number of ways. It can also cause obesity and anti-social behaviour in younger people. So this is one habbit that pretty muche everybody should be steering clear of.

Highly educated individuals have lower rates of dementia.  In fact, the level of education is one of the best predictors of protection against dementia and Alzheimer’s disease. When you learn new things, you make new connections and this makes you more resilient. A number of studies have proven that learning new skills can benefit memory. These skills could be anything that you have not tried before, the more difficult the skill the more impact it will likely have.

6- You’re Stressed All The Time:

Stress has been attributed to a large number of illnesses that can impact someone later in their life. This includes the slowing down of brain function and dementia. Stress hormones such as cortisol are released in the brain during times of high stress and can cause the imparement of cognitive ability and memory. These hormones are particularly harmful for the hippocampus, which is the part of the brain that stores memories. Some studies say that just one very stressful experience can age your brain by four years.

Smoking is regarded as one of the worst habbits one can pick up. It has negative impacts on a number of different parts of the body, including the brain. Researchers have found that those that smoke or drink daily have relatively older brains than those who do not.

Consult a doctor if you have been experiencing memory difficulties and changes in your thinking skills. You can find and book an appointment with the top Neurologists in Karachi, Lahore and Islamabad through oladoc.com. You can also call our helpline at 042-3890-0939 for assistance to find the RIGHT doctor for your health concerns.