Myths about schizophrenia that need busting 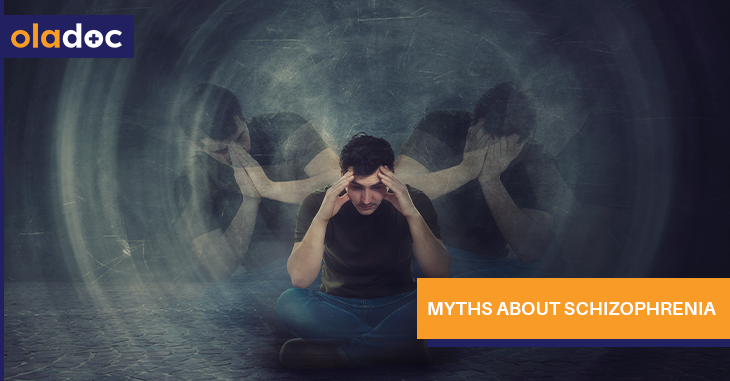 Schizophrenia is a mental disorder that falls under the category of psychotic disorders. It is characterized by delusions (false beliefs in conflict with the reality), hallucinations (feeling, hearing or seeing things not actually present), muddled thoughts, as well as lack of emotions and impaired everyday functioning.

If the psychological disorder is left untreated, it can lead to several problems. Patients may develop severe depression and other mental health issues such as anxiety disorders or obsessive-compulsive disorder (OCD) as well as lack the ability to work, study etc. Moreover, without treatment, patients are likely to get suicidal, indulge in drug abuse, and resort to self-isolation from society.

The illness has been around for a very long time now. A lot of research has been conducted on the topic and advances have been made with regards to the treatment and care of patients with the disease. Here are some of the Myths about schizophrenia:

Myth: Bad parenting may cause Schizophrenia

Poor parenting does not cause schizophrenia. The illness is caused by one or a combination of reasons such as genetics, trauma, drug abuse etc. While genes are one factor behind making a person susceptible to the disorder, how a person is parented is not a cause. In fact environmental stressors and other factors listed can trigger the onset of the illness.

Reality: This perception is a result of the images portrayed in TV shows and movies. Although associated with unpredictable behaviors, schizophrenic patients, particularly those being treated, are generally not violent. Violence committed by such patients often results from some other problem such as substance abuse or behavior issues. This is one of the most damaging myths about schizophrenia.

Myth: Schizophrenic patients are not intelligent

Reality: It is often assumed that mental disorders such as schizophrenia lead to learning impairments and lower IQs. However, history has proven otherwise. Famous personalities like the Russian ballet dancer Vaslav Nijinsky and Nobel Prize-winning mathematician John Nash suffered from schizophrenia.

Myth: A person is sure to have Schizophrenia if his/her parent has it

Reality: Whilst genes do play a role, the chances of getting the mental disorder are only about 10% if one of your parents suffers from it.

Reality: The mental disorder can hinder day to day functioning including finding a job and sticking to it. However, the task is not impossible. Correct treatment can help people manage a healthy work life. This is a very difficult Myth about schizophrenia for people to overcome

Reality: Again, Schizophrenic patients often have a hard time managing everyday chores. This does not however, mean they are lazy. Often times, a little assistance is required by the patients in order to perform better.

Reality: In the past, schizophrenic patients were believed to belong in mental asylums. However, with the advancement of medical science and clinical psychology, patients can live their lives alongside supportive families and community members.

Reality: While it is less common than other mental disorders such as depression, according to the world health organization, schizophrenia affects about 20 million people across the globe.

Reality: The illness is labeled as a severe and chronic mental disorder. The treatment is often life-long. However, the World Health Organization claims that it is treatable with the help of medication as well as “psychosocial support”.

Myth: Schizophrenia symptoms are uniform for all

Reality: Like most mental disorders, schizophrenia also exists on a whole spectrum. The disorder takes multiple forms and manifests via symptoms with varying levels.

While the disorder is treatable, there are social stigmas associated with it. Psychological problems are still tabooed in most societies and not given due importance. This results in delays in treatment and/or the lack of proper treatment for patients. Incorrect diagnosis is another huge problem. In order to improve the quality of life of schizophrenic patients, proper, timely treatment is imperative.

If you feel that a loved one or someone you know has Schizophrenia, please do not take it lightly. It is often difficult for patients with Schizophrenia to identify the connection between their problems and their mental health.

This article can be your starting point in getting rid of some of the most common myths associated with the mental disorder. However, for professional advice, book an appointment with a Psychiatrist in Lahore, Islamabad or Karachi through oladoc.com, or call our helpline at 042-3890-0939 for assistance to find the RIGHT professional for your concerns.

Dr. Hira Tanveer - Author Dr. Hira Tanveer is an MBBS doctor and currently serving at CMH Lahore. Writing is her favorite hobby as she loves to share professional advice on trendy healthcare issues, general well-being, healthy diet, and lifestyle.
« Some tips and tricks to help you improve your posture
A guide to help you resist cravings for unhealthy food »
Book Appointment with the best "General Physicians"