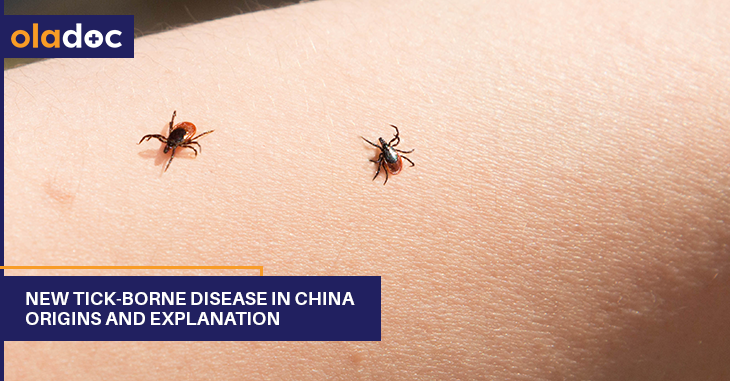 A big country with a large population, China has had its fair share of challenges. First, it was the coronavirus that originated in Wuhan, China, and took the entire region and then the world, by a storm. China had barely managed to recover from the havoc wreaked by this virus that another trouble starting brewing. A tick-borne disease has been observed in the eastern provinces of China, namely Jiangsu and Anhui. The disease has taken the lives of 7 people, and around 60 people have been infected by it.

Belonging to the species of arachnids, ticks are bugs that suck blood. While there are a wide variety of ticks, two are very dangerous. These include hard and soft ticks. Ticks can transmit diseases in humans and other animals as well.

Depending on the type of ticks, they can keep sucking blood anywhere from an hour to even days. Due to their small size, the bite may even not be discernible, and hence people may not even know that they were bitten, to begin with!

Ticks may be small in size, but not in impact. These bugs host a lot of pathogens; bacteria, viruses etc. Ticks are vectors and therefore cause the transmission of these pathogens in humans.

Once contracted, the tick-borne diseases can also be transmitted from one person to another. Moreover, the disease can also infect livestock as well. This further complicates the already very convoluted situation.

Due to the hoard of pathogens that this tiny bug carries, a person can be thus attacked by more than one pathogen, leading to added complications. In extreme cases, these infections can be severe enough to result in death even.

Ticks are more common during warmer weather and are prevalent in warmer climates. They are also found more in greener areas like forests, grass, woods, etc. Since the topography and weather of China is conducive for the growth of the ticks, hence they are found abundantly in the country.

A more commonly known disease caused by a tick is the Lyme disease. The prevalence of this disease is more widespread, especially in the northern regions of China. It generally manifests as a sort of one-time attack, but it becomes chronic if left untreated.

The early symptoms of the acute disease include fever, arthritis-like joint aches, chills, lethargy and weakness, headache, rash, etc. In the case of a chronic condition, the symptoms aggravate. The more severe signs of the disease include migraines and headaches, rashes, aches in the musculoskeletal systems like bones, joints, etc. and arthritis in worse cases.

Moreover, there are other very serious conditions and symptoms that also occur due to Lyme disease. These include heart conditions like arrhythmia, palpitations, etc. Similarly, it also gravely impacts the neurological system, leading to disorientation, memory loss, inflammation of the CNS, etc.

Similarly, TBE is also caused by ticks. It affects and infects the nervous system. It is prevalent in many parts of China and is especially active during the months of May and June. Crimean-Congo hemorrhagic fever in China another one of the ticks borne disease, although its prevalence is limited to very specific regions only. It takes several months post-infection to manifest.

Q-fever also is caused by ticks. It mostly strikes livestock and rodents. However, it is present in significant parts of China. Tularemia and North-Asia tick-borne spotted fever are also caused to the infections from tick bites.

More recently have new ticks borne diseases been discovered in China. These emerging diseases include HME or human monocytic ehrlichiosis. Present in around 7 provinces of the country, HME causes symptoms like fever, headaches, muscle aches, or myalgias which are common in viral infections, the appearance of rashes, etc. HGA is also amongst the ticks borne disease being discovered in China.

Furthermore, the novel bunyavirus has also caused much alarm amongst scientists. Discovered 9 years ago, this virus results in a lethal disease called Severe fever with thrombocytopenia (STFS) or Fever, Thrombocytopenia, and Leukopenia Syndrome (FTLS).

Initially, the outbreak of this disease was reported in the 11 provinces of China. Patients presented with symptoms of fever, low platelet levels or thrombocytopenia, digestive issues at the start of the infection. People either recovered from this phase, or their disease becomes more severe. It then led to the multiorgan failure stage, where symptoms other than organ failure included neurological issues, further lowering of the platelet levels, etc. This disease had a high mortality rate of 30%.

Finally, after much research, the novel bunyavirus was isolated as the root cause of the infection. In recent history, cases of transmission of this virus in animals –cats in specific –have been reported as well.

The New Tick-Borne Disease In China

People were alarmed at first at the news of a new tick-borne disease in China. However, upon investigation, the disease present in all the patients was SFTS. Since the pathogen is not novel, hence the scientists are not much concerned with the disease, as was the case with COVID-19.

The alarming news about this disease is its high mortality rate. Moreover, many also believe that this disease can also possibly spread from one person to another, and thus becoming a cause of grave concern for all. Hence, while perhaps not as contagious as coronavirus and not as widespread, this disease poses all sorts of challenges to the people.

Although we are seeing new diseases, the coronavirus is still far from gone. It is important you take as many precautions as you can and If you or someone you know is showing symptoms then get tested immediately. You can book a COVID-19 test via oladoc.com or by calling at 042-38900939.

Dr. Hira Tanveer - Author "Dr. Hira Tanveer is an MBBS doctor and currently serving at CMH Lahore. Writing is her favorite hobby as she loves to share professional advice on trendy healthcare issues, general well-being, healthy diet, and lifestyle. "
« Simple Relief Techniques For Tooth Pain
How to Get Your Baby to Sleep Through the Night »
Book Appointment with the best "General Physicians"