Home » Healthy Lifestyle » Zika Virus And Other Torch Infections: What You Need To Know

Zika Virus And Other Torch Infections: What You Need To Know 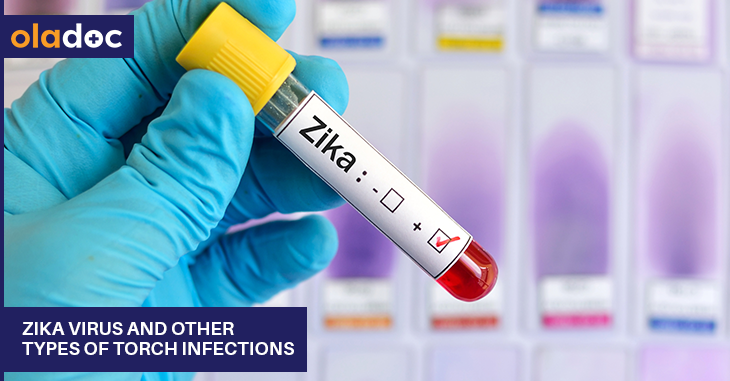 Zika and TORCH infections are a type of congenital infections that are transmitted from the mother to the baby during pregnancy. These are also known as infections having vertical transmission. Read on to know more about vertical infections and what you can do about them:

What is zika virus infection?

Zika virus is a mosquito-borne virus that caused an epidemic in 2015. Prenatally acquired zika ended up causing a 20-fold increase in congenital microcephaly in Brazil. Zika was originally discovered in 1947, where it was named zika after the forest in Uganda where it was found. While it was initially thought to be benign, it was declared: ‘Public Health Emergency of International Concern’ by the World Health Organization (WHO) in 2016; it caused infection in an estimated 28000 people.

Infected patients can have mild symptoms like fever, muscle aches, rash, and conjunctivitis. Severe forms include neurological symptoms, mostly motor weakness. In newborn babies, zika can cause microcephaly and other severe brain defects. Recent reports confirm that zika can infect the placenta, is transmitted through the blood of the mother to the fetus and can cause malformations in the fetus. Collectively, the malformations that zika causes have been termed: congenital zika syndrome (CZS).

Complications of pregnancy with zika virus include miscarriages and intrauterine fetal death. In 20 percent of pregnant ladies, zika virus can lead to placental dysfunction. Fetal hydrops is also common in such pregnancies, with intrauterine growth restriction, especially after 18 weeks of gestation.

An observational study on the Zika virus and its association with microcephaly concluded that women who were infected with zika virus earlier in pregnancy (first two trimesters) were 17 times more likely to have a baby with microcephaly. Moreover, such women were also found to have a higher risk of developing birth defects other than microcephaly. Currently, there is no known drug for the treatment of this virus, and only supportive therapy is given to patients.

What are some TORCH infections other than the zika virus?

TORCH is an acronym for infections of a developing fetus by vertical transmission through the following organisms: (T)toxoplasmosis, (O)ther organisms, (R)ubella, (C)ytomegalovirus and (H)erpes simplex. Infection with any of the aforementioned agents can lead to a constellation of symptoms that are similar to each other, in the newborns.

TORCH infection can also result in a miscarriage of the baby; it can also cause early delivery, delayed fetal growth, and maturation.

The symptoms caused by TORCH infections can be overlapping; these infections can present with: fever, difficulty in feeding, micro-hemorrhages in the skin causing small areas of bleeding, enlargement of the spleen and/or liver (hepatosplenomegaly), jaundice (yellowish discoloration of the skin and mucous membranes), hearing impairment, congenital cataract (abnormalities in vision) as well as heart defects. There can be variation in disease or symptoms depending on the stage at which the baby catches the infection.

Toxoplasmosis can cause symptoms like abnormal smallness of head (microcephaly), inflammation of the layers of eyes (chorioretinitis), calcium deposits in the brain (intracranial calcifications) among other abnormalities. Treatment therapies for toxoplasmosis include the administration of pyrimethamine and sulfadiazine.

Rubella is characterized by upper respiratory tract infection, skin rash, joint pain, swelling of lymph nodes, and fever. In severe form of infection, there can be congenital cataracts causing visual impairment, calcium deposits in the brain, and hearing impairment. To prevent congenital rubella, there are vaccines available for women of the reproductive age group that should be taken before conception. The treatment of rubella in infected children is mostly supportive and symptomatic.

Cytomegalovirus is another TORCH infection that can occur during pregnancy, but it may also occur after birth. In infants, it can cause growth retardation, enlargement of liver and spleen (hepatosplenomegaly) and inflammation of the liver (hepatitis), anemia, and calcium deposits in the brain. Treatment of children with cytomegalovirus is mostly based on the symptoms.

Herpes is a rare disorder that infects newborns with herpes simplex virus (HSV). In most cases, this infection occurs at the time of delivery through a genital lesion. In severe forms, fluid-filled blisters form on the skin (cutaneous vesicles) with lesions in the mouth area, conjunctivitis, and hepatitis. Antivirals like acyclovir are used for the treatment of herpes infection.

How to avoid TORCH infections?

The Centers for Disease Control and Prevention (CDC) recommend the following tips to avoid infections before and during pregnancy:

Pregnant ladies should avoid the use of unpasteurized (raw) milk and milk products. For instance, soft cheeses should not be eaten when pregnant to avoid the risk of getting infections like listeria.

Moreover, pregnant ladies should avoid handling cat litter. It is also important for women who are pregnant and who are trying to get pregnant to be screened for blood-borne diseases like hepatitis B and C.

Some people with these infections do not feel sick and do not have the usual symptoms, yet they can pass them onto their children, and therefore, caution must be exercised. Pregnant women should also get the recommended vaccines, such as those against rubella.

Additionally, staying away from people with infections is important, especially before vaccinations.

If you are pregnant and worried about torch infections, you should seek professional help. Since the country is under lockdown because of the spread of coronavirus, it is not advisable to go out just for the sake of information. Instead, you can book an online doctor video consultation with a gynecologist via oladoc.com and get a doctors’s opinion while maintaining social distancing.

If you have however symptoms and actual problems related to pregnancy, book an appointment with a top gynecologist in Lahore, Multan, and Islamabad through oladoc.com, or call our helpline at 042-3890-0939 for assistance to find the RIGHT professional for your concerns.