Home » Healthy Lifestyle » Are Lectins Bad for You?

Are Lectins Bad for You? 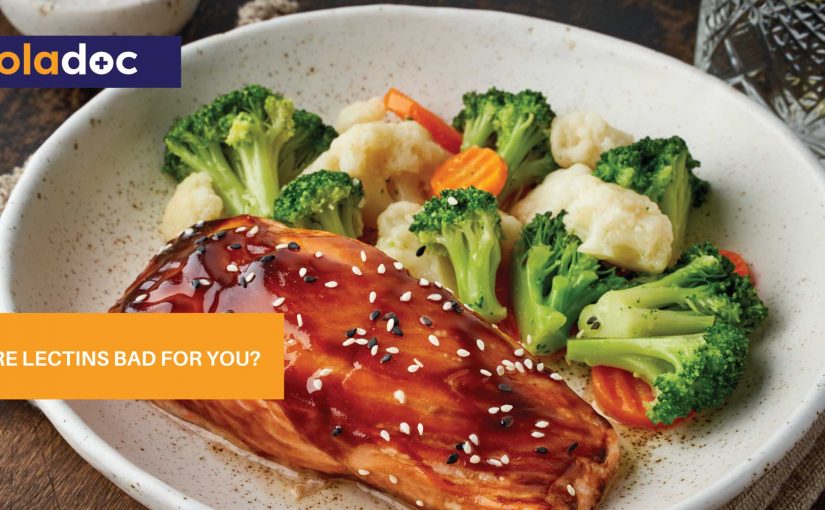 Lectins are proteins that are found in the roots, stems, leaves and seeds of many plants. They are also that a part of the defense system of plants. To protect themselves and their seeds from being eaten, plants rely on lectin proteins to keep insects away. Lectins are found in foods that are said to be good for health such as legumes, whole grains, tomatoes, squash, beans, nuts, eggs, and dairy. They gained prominence after the popularity of a book that claims that lectins are potentially dangerous. The book, called The Plant Paradox, says that foods that contain lectin can make weight loss difficult. The authors argue that humans weren’t supposed to eat foods with lectins and avoiding lectins will promote weight loss, decrease inflammation, and lead to a healthier lifestyle overall. This has caused confusion amongst people as plant foods are mostly considered healthy!

Lectins bind to carbs and this facilitates the communication between cells. When insects try to eat plants with lectin, they feel sick and avoid eating them again. Steven Gundry, the author of The Plant Paradox, argues that lectins are inflammatory and may lead to leaky gut, irritable bowel syndrome, and weight gain.

Lectins are anti-cancerous and are beneficial to the immune system. However, they do not have any documented role in human nutrition. Uncooked or undercooked foods with high amounts of lectins may also give you food poisoning.

However, this doesn’t make beans and legumes unhealthy. They are a good source of fiber, vitamins, and minerals. Legumes also help regulate blood sugar. The fear of lectins can be harmful to the health of the general population.

The problem with lectins, according to Gundry, is that they can increase intestinal permeability and lead to the leaky gut syndrome. When the intestinal wall becomes permeable, toxins, bacteria, viruses, and partially digested food can pass through. Some symptoms of the leaky gut syndrome are diarrhea, constipation, gas, and bloating. Your gut has a border to defend it and when intruders try to enter, your immune system launches an attack to fight the invaders. This results in inflammation. Gundry says that when you eat lectin-rich foods regularly, your body is constantly under attack and this leads to chronic inflammation. In the long run, chronic inflammation can lead to an autoimmune disease, which means your immune system will start attacking healthy tissues in your body.

Gundry also claims that lectins are responsible for instigating the immune system to attack blood vessels and this may lead to heart diseases. He also says lectins may also be responsible for the Parkinson’s disease. He also says that the symptoms of the people suffering from the celiac disease may improve if they stop eating lectins.

Although it should be noted that having a lectin free diet is very difficult as a large number of healthy foods contain some amount of lectins. In fact a 2015 study found that around 30% of the food you eat contains lectins. Most of these foods are completely safe, so long as they are cooked properly, as this renders the lectins harmless. So cutting lectins out of your life completely is very difficult and might leave you with some nutritional deficiencies such as a lack of fiber.

It is also important to note that the research on the effect of lectins on humans is lacking, so we can’t be certain that they are bad or good for you. A number of sources have come forward with different often contradictory claims but most of these are from sites that are trying to sell products. So it is best to trust medical professionals and well reviewed studies when it comes to this sort of data.

There has been one study that showed that removing lectins helped people who had inflamatory bowel disease, but this was a fairly small study and it is unclear if this would apply to the wider population. Having a lectin free diet will be particularly difficult for vegetarians as a large number of essential nutrients, particularly protien, come from foods that are rich in lectins. So if you are a vegetarian, this diet may seriously hamper your overall health.

The conclusion you should draw here is that for the most part, they are absolutely harmless. Since most of the high lectin foods are cooked before they are eaten, humans really end up consuming a negligible amount of this protien. So although it has the potential to be toxic, it likely will never impact a regular healthy individual and thus, you don’t need to worry about it.

The general consensus amongst doctors is that a really low percentage of the general population is sensitive to lectins. If you have an autoimmune condition or stomach problems, you can consult a doctor about a short-term lectin elimination diet. You can find and book an appointment with top Doctors in Karachi, Lahore and Islamabad through oladoc.com. You can also call our helpline at 042-3890-0939 for assistance to find the RIGHT Doctor for your health concerns.

Disclaimer: The contents of this article are intended to raise awareness about common health issues and should not be viewed as sound medical advice for your specific condition. You should always consult with a licensed medical practitioner prior to following any suggestions outlined in this article or adopting any treatment protocol based on the contents of this article.
« 12 Foods That Can Help Heal Broken Bones
5 Summer Foods That Can Make You Sick »
Book Appointment with the best "General Physicians"