Home » Child Care » Breastfeeding vs Formula, Which Is Better for the Baby?

Breastfeeding vs Formula, Which Is Better for the Baby? 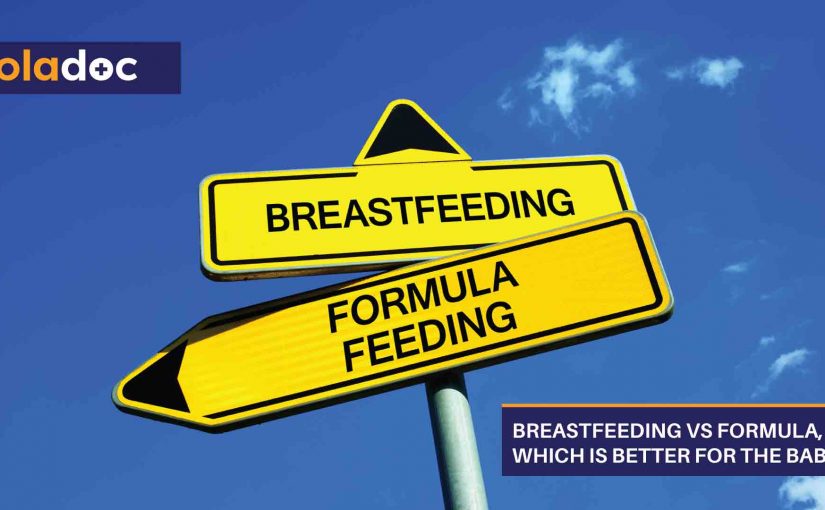 Mostly, in popular culture and scientific community, the benefits of breastfeeding are often stated. Expectant mothers are loaded with loads of advice on what the the proper diet for their infant should be! Choosing whether to breastfeed or formula feed their baby is one of the most important decisions that new parents have to make. We have decided to break down the breastfeeding vs formula debate for you and see for ourselves which is the way to go!

The American Society of Pediatrics strongly recommends exclusive breastfeeding for 6 months and breastfeeding for a year with a diet of fruits, vegetables and grains. The reason for that is that breastfeeding provides the ideal nutrition for the baby. Breast milk is packed with vital nutrients, proteins and fat which are essential for the body to grow. The first stage of breast milk also contains colostrum, a thick, milky fluid that has immunoglobulins, antibodies that protect the baby from early on-infections. Where formula feeding does provide some basic dose of vitamins, proteins and fat, it can’t replicate the exact composition of breast milk in terms of antibodies. In fact breast milk actually adjusts itself to meet the needs of the baby, especially during the first month, so it is the ideal nutrition for the baby nearly every time. One exception, though is vitamin D, as breast milk doesn’t doesn’t contain it and the formula milks are often fortified with it. With exclusive breastfeeding, Vitamin D supplements are recommended by the doctor. This is likely the most important factor in the breastfeeding vs formula debate.

Allergies and illnesses. What helps more?

Breastfeeding has also been linked with a decrease in the occurrences of allergies and illnesses among children. Children who were breastfed had a lower risk of asthma and allergies. Generally, the earlier a child is fed a certain food, the more likely they will develop an allergy to it. Breast milk helps protect against allergies in two ways, 1. The baby is only being exposed to the foods that the mother secretes in her milk. 2. The milk also boosts up the child’s immune system. This happens because breast milk contains important antibodies that the mother has developed over her the course of her own life. It also creates a protective layer in the childs nose, throat and digestive system, thus protecting it from a large number of common ilnesses. Commercial formula do not contain the immunity boosting formulas needed for the baby’s growth!

Let’s face it. The issue of money is important as well. If you are going to formula feed, then you would have to set aside quite a few bucks. The fact that breastfed babies are also less likely to be sick means there will be fewer trips to the doctors office, which means fewer doctors fees. That money could very well be saved. Another advantage is convenience as buying the right formula and then preparing it can take up a lot of time. Breast milk is ever-ready and is always at the right temperature for the baby!

Breast milk is also easier to digest for the baby than formula milk. The components of a breast milk, lactose, protein (casein and whey) are much easily digested by a baby. The enzymes in the breast milk make it much easier to digest than formula or cow’s milk. This is why breastfed children have fewer bouts of diarrhea and constipation! This point goes to breast milk as well as commercial formulas can’t replicate the exact constituents of breast milk. That is because breast milk is a natural substance that is made by a mother for her individual baby’s needs and this process can’t be replicated in a factory.

All hope is not lost, however for the formula feeding supporters. There are definitely some benefits to formula feeding as well. Mother’s whose breastfeeding is unsafe and who can’t breastfeed their baby due to a health concern can certainly rely on formula milk. In addition, anyone can feed the baby with the formula milk so a mother’s presence isn’t required, so it may be the best choices in situations where the mother is unable to feed the baby herself. Also, you don’t have to worry about mother’s diet affecting the baby when formula feeding as bad diet such as spicy foods can make it difficult for the baby to digest the milk.

In conclusion, the breastfeeding vs formula debate is a personal one and it helps to weigh the pros and cons of both sides. For further consultation on what is best for your baby, you can can contact a doctor.You can also book an appointment with the top Pediatricians in Karachi, Multan or Islamabad through oladoc.com, or call our helpline at 042-3890-0939 for assistance to find the RIGHT Doctor for your child’s health.

Disclaimer: The contents of this article are intended to raise awareness about common health issues and should not be viewed as sound medical advice for your specific condition. You should always consult with a licensed medical practitioner prior to following any suggestions outlined in this article or adopting any treatment protocol based on the contents of this article.
« Foods Rich in Vitamin D
What Is Irritable Bowel Syndrome (Ibs)? »
Book Appointment with the best "Child Specialists"