Anxiety VS Depression: What’s The Difference? 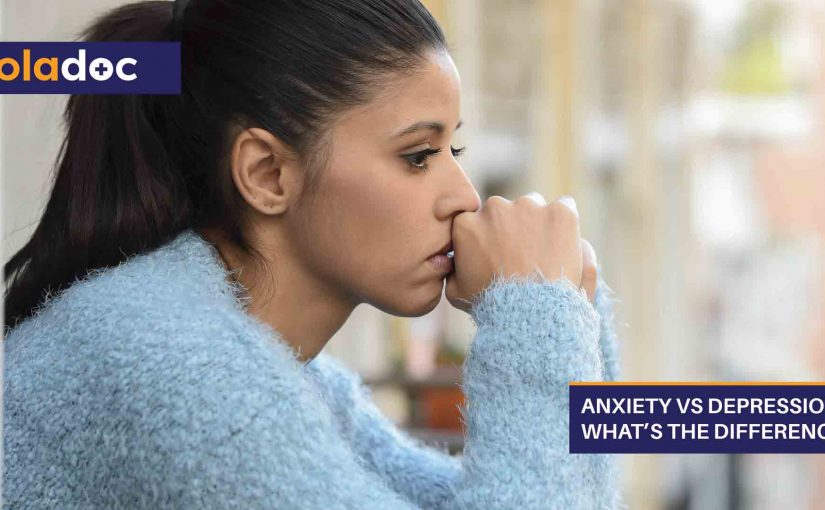 Depression and anxiety are two of the most prevalent mental health conditions. Even though medical professionals have developed specific diagnostic criteria for different types of mental disorders, many of them overlap in one way or another, which often causes confusion. Although depression and anxiety have a lot in common, they are two separate conditions as we will prove below in this important anxiety vs depression comparison.

There is no foolproof way of telling whether you have depression or anxiety. Half of the patients suffering from depression also have anxiety. Some patients have both depression and anxiety, and some patients develop depression symptoms because of their anxiety disorder. Symptoms of one condition may bleed into the other, as both have similar causes and manifestations.

When a person suffers from both anxiety and depression at the same time, this is an example of a comorbid condition. One condition predisposes the patient to the other. Studies have shown that people who have generalized anxiety disorder and major depressive disorder have the same neurobiological and genetic factors. Women generally have a higher risk than men for both the conditions.

Unlike depression, anxiety is characterized by persistent worry. It is normal to be anxious sometimes but having anxiety stretches beyond that. When a person feels anxious all the time, it can interfere with relationships, school, work, and self-care. This is when it becomes a disorder. Worrying to the extent that it occupies a huge chunk of the day, is a form of obsessive thinking which is a sign of an anxiety disorder.

A person who suffers from anxiety tends to worry a lot about the future, overwhelmed with the fear that everything will go badly. They thus develop the urge to avoid  and run away from everything. Although most people do feel anxiety on some level at various points in their lives, it is when this anxiety is out of proportion and lasts a long time that it becomes a disorder. This can be absolutely debilitating for many people as they are too paralyzed with anxiety to go about their lives.

There are actually a large number of different types of anxiety disorders such as generalised anxiety disorder and panic disorder, and all of them are characterised by different kinds and severity of anxiety. Panic disorder for example is very intense and often leads to panic attacks which can be very serious and can hamper a person’s lifestyle, preventing them from engaging in certain activities that may trigger such attacks.

Depression, which is also called major depressive disorder or clinical depression, is marked by an empty, sad, or hopeless feeling which lasts for more than two weeks. Patients enter a state of depletion and their body feels drained and broken. There are actually a number of different symptoms for the disorder that include having suicidal thoughts or not being able to enjoy life. It is not easy to just snap out of these feelings as they are manifestations of an actual physiological illness that needs to be treated as such.

Depression takes hold of those areas of the brain responsible for happiness and pleasure. The patient is unable to find hope, joy, and contentment because of the deprivation of such functioning. They lose interest in the things they once enjoyed. Some of these symptoms can even manifest physically, resulting in a lower sex drive, changes in appetite, disturbed sleep and many more. It can also vary in severity for different people, some people can manage their depression at home using lifestyle changes or medication while others have to be hospitalised for long periods of time.

Although both disorders are treated in similar ways (with therapy and medication) and both do involve some similar symptoms (having trouble concentrating) it is important to understand the differences between the two. The anxiety vs depression debate is often very muddled due to these similarities and the fact that they often occur together, but they do both lead to different kinds of problems.

Unlike a person suffering from anxiety, a depressed person doesn’t usually worry about the future because they are certain that the future will be bleak as their present. Both anxiety and depression can affect concentration levels. Both conditions manifest physiological symptoms. For instance, a person with anxiety might find it difficult to fall asleep while a person with depression often has trouble waking up. Understanding the anxiety vs depression debate is an important part of understanding these disorders.

If you have been under a lot of stress lately and find it hard to cope with it, it is recommended that you visit a specialist doctor and get help. You can book an appointment with a top psychiatrist in Lahore, Karachi and Rawalpindi through oladoc.com. You can also call our helpline at 042-38900939 for assistance to find the RIGHT doctor for your health concerns.

Disclaimer: The contents of this article are intended to raise awareness about common health issues and should not be viewed as sound medical advice for your specific condition. You should always consult with a licensed medical practitioner prior to following any suggestions outlined in this article or adopting any treatment protocol based on the contents of this article.
« What Makes Soda So Bad for Your Health
Top 4 Urologists in Islamabad »
Book Appointment with the best "Psychiatrists"