What Makes Soda So Bad for Your Health 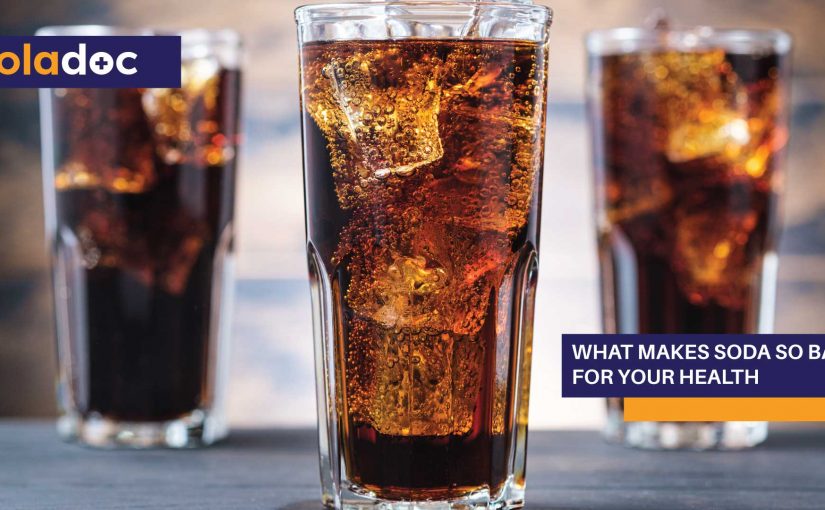 According to Gallup, the number of sodas consumed each year has been declining since the 1990s. While that is good news, a lot of people still consume gallons of soft drinks each other. Some people have even admitted to drinking more soda than water every day even though it is common knowledge that soda is bad for your health.

High consumption of soda can have serious implications on health. Even though it can sometimes be hard to resist soda, it is essential to cut back as studies have shown that even moderate consumption of soft drinks can be bad for one’s health. Here is why you need to kick the habit:

You Are Not Getting Essential Nutrients:

People who have a habit of drinking soft drinks instead of healthy beverages such as fruit juices and milk are likely to have vitamin A, magnesium, and calcium deficiencies. Soda also has phosphoric acid, which depletes two immunity-boosting nutrients, magnesium and calcium. Phosphoric acid meddles with the body’s ability to absorb calcium.

Sodas Have A Lot Of Sugar:

Soda manufacturing companies are one of the largest users of sugar. A single can of soda has nearly 10 teaspoons of sugar. This much sugar, particularly in liquid form, drastically increases blood sugar levels thus causing a jump in insulin levels as a reaction.

This may lead to insulin resistance or diabetes over time, in addition to weight gain and other health issues. Soft drinks have their sugar content in the form of high-fructose corn syrup which may lead to a higher production of free radicals.

If you think that diet soda is not as harmful as regular soda, you might be mistaken. Diet soda makes you more susceptible to metabolic syndrome, which causes high blood sugar, belly fat, and high cholesterol. Diet soda contains aspartame which can actually be more harmful than sugar.

It has been linked to various health problems such as multiple sclerosis, emotional disorders, seizures, diabetes, and brain tumors. At warm temperature, aspartame converts to methanol, which breaks down to formic acid and formaldehyde which are carcinogenic (cancer-causing). Many medical professionals have said that diet soda is bad for your health.

Both regular soda and diet soda contribute to weight gain. Studies have shown that people who drink soda have an increased risk of being overweight or obese. Anything that tastes sweets signals your body to store carbohydrates and fats, making you hungrier. Sweet tastes also increase insulin release, blocking your body’s ability to torch fat.

Consumption of soda causes dehydration because it has high levels of sodium, sugar, and caffeine which are diuretics.

Soda Sugar Turns into Fat in Your Liver

Sugary drinks are the easiest and most common way to consume excessive amounts of fructose.

When you consume too much, your liver becomes overloaded and turns the fructose into fat.

Some of the fat gets shipped out as blood triglycerides, while part of it remains in your liver. Over time, this can contribute to nonalcoholic fatty liver disease.

Soda May Be Addictive

It’s possible that sugary soda is an addictive substance.

In rats, sugar binging may cause dopamine release in the brain, giving a feeling of pleasure.

Binging on sugar may have similar effects in certain people, as your brain is hardwired to seek out activities that release dopamine.

In fact, numerous studies suggest that sugar — and processed junk foods in general — affect your brain like hard drugs.

For individuals predisposed toward addiction, sugar may cause reward-seeking behavior known as food addiction.

Studies in rats demonstrate that sugar can be physically addictive.

While addiction is harder to prove in humans, many people consume sugary drinks in a pattern typical for addictive, abusive substances. This then leads to all the other things that make soda bad for your health.

Sugar intake has long been linked to heart disease risk.

One 20-year study in 40,000 men found that those who drank 1 sugary drink per day had a 20% higher risk of having — or dying from — a heart attack, compared to men who rarely consumed sugary drinks.

You can consult a nutritionist to learn about healthy alternatives to soda. You can find and book an appointment with top Nutritionist in Lahore, Karachi, and Islamabad through oladoc.com. You can also call our helpline at 042-38900939 for assistance to find the RIGHT doctor for your health concerns.

Dr. Nosheen Abbas - Author Dr. Nosheen Abbas is a Dietitian and Nutritionist. Dr. Nosheen Abbas is among the Best Dietitians in Islamabad. She has a MBBS, MSPH and SNHS Dip. (Holistic Nutrition) UK degree along with an experience of 13 years. She is also a member of Pakistan Medical and Dental Council (PMDC) and its pmdc number is 45457-P.
« 4 Major Reasons Why Children Are More Susceptible to Ear Infections
Anxiety VS Depression: What’s The Difference? »
Book Appointment with the best "Nutritionists"