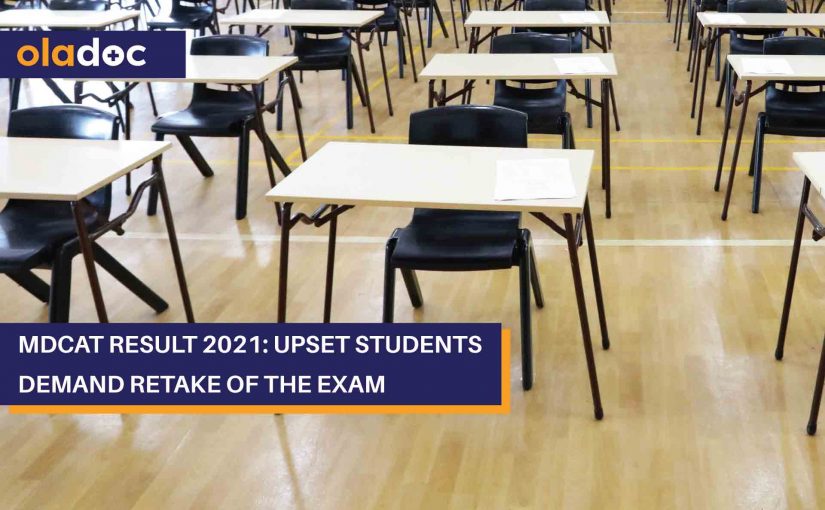 The PMC MDCAT (Medical & Dental College Admission Test) is an entry test held in Pakistan every year. The test is of utmost importance to aspiring medical students who wish to take admission in medical colleges across the country.

MDCAT in 2021 has so far proved to be chaotic. Pakistani students are extremely dissatisfied with PMC’s regulations, questioning their system and even going so far as to request a retake of the MDCAT exams.

Several students received marks below their expectations in the MDCAT result and have started taking out their frustration over social media and through protests.

Why Are Students Upset Over MDCAT Result?

Pakistani students are reporting several issues and flaws in PMC’s policies for conducting the MDCAT exams.

Students are blaming PMC’s policies for the unsatisfactory scores they have obtained in the MDCAT exam. Here are some of the major issues that students seem to be upset about:

Due to these issues questions that have been attempted by a student are reportedly ignored or skipped in the final result marks as the system does not assess that the student attempted them.

Many other problems related to internet connectivity amid the exam have been reported and students believe the software being used to run the tests is the probable cause behind these issues.

PMC says that its system does not rely on an external internet connection and even though the Wi-Fi may show as down for a particular time, it doesn’t impact the exam whatsoever.

Many students claim that the TEPS keys for the practice tests of MDCAT exams are flawed. There are several screenshots posted on Twitter as proof of this claim. For instance:

3. Out of Syllabus Questions

Students have reported that the questions they got in the MDCAT exams were out of syllabus and hence difficult for them to attempt.

Some questions that students reportedly received in the MDCAT exams were ambiguous and so it was very difficult to attempt them properly. Here’s a screenshot of one such question that a student posted on Twitter:

The detailed breakdown of results is not available for the official MDCAT exams as opposed to the practice tests. This is something that has been brought up many times but the reasoning behind it is still unclear.

Students believe that during the MDCAT exams there were some questions which they had skipped with the intention of attempting them later.

This in turn resulted in marks not being recorded for those specific questions in the final result. The PMC has denied this claim.

The Response of PMC

Despite several students coming forward to alert the masses on the inherent flaws in the MDCAT exams conducted this year, the PMC (Pakistan Medical Commission) has maintained a firm stance on this matter.

Here’s their response to some of the common queries and suspicions of students regarding MDCAT.

It has assured the candidates that they have no reason to worry. The PMC has so far also denied any flaws reported in its system, calling them mere “rumors.”

The PMC also insists that the system is working “absolutely fine.”

The PMC also warned students that the messages regarding MDCAT questions floating around on the internet are fake. They have advised the students to pay no heed to such messages.

PMC has also recently announced that students who appeared in the MDCAT 2021 exams will be provided with an examination certificate with details regarding their results on 1st October 2021.

The students are not happy with the PMC MDCAT Result 2021 and have demanded that the MDCAT exams should be reconducted.

While that doesn’t seem to be a scenario that is likely to occur, PMC does need to provide some sort of relief to the students. How they’ll manage to calm down a brewing storm of dissatisfied youth remains to be seen.

However, protests regarding the MDCAT exam results seem imminent as students across the country have urged their fellow MDCAT candidates to come together and stand up for their rights.

We hope, the situation subsides in the coming months, students are provided with the rewards they rightfully deserve, and any discrepancies in the PMC MDCAT result are corrected.

This is important to ensure that the hard work and diligence of students do not go in vain and their right to complete fairness and transparency in the MDCAT exams is restored.

Disclaimer: The contents of this article are intended to raise awareness about common health issues and should not be viewed as sound medical advice for your specific condition. You should always consult with a licensed medical practitioner prior to following any suggestions outlined in this article or adopting any treatment protocol based on the contents of this article.
« Hijama: All you need to know about cupping therapy
Likoria: Causes, Symptoms and Treatment »
Book Appointment with the best "General Physicians"

Shortage Of Panadol In Pakistan: 8 Alternative Medicines You…