Fainting and the Summer Heat 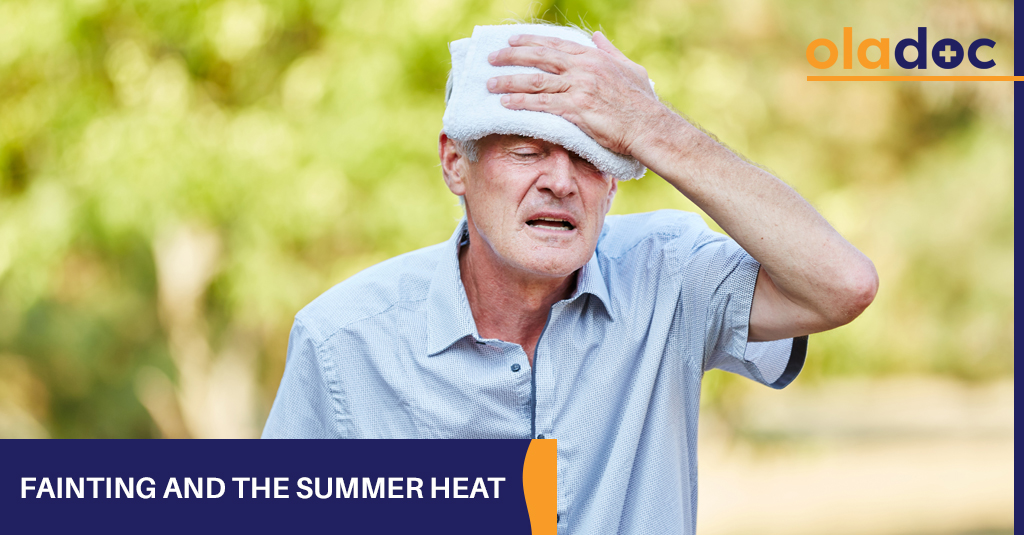 Fainting, known in the medical world as ‘Syncope’, is the involuntary and sudden loss of consciousness in a person as a result of various internal (blood pressure changes) and external factors, such as standing for long periods of time, standing suddenly, fear, pain, and prolonged sun exposure; which is then known as ‘Heat Syncope’. However, before we go into the details of heat syncope, let us first understand how one faints.

Normally, for any of the above situations, the body succeeds in maintaining blood pressure by constricting blood vessels, increasing heart rate, and releasing relevant hormones into the bloodstream, as a result, the brain remains oxygen-enriched and the body continues its functioning. However, due to some triggers, the body fails to regulate blood pressure, causing reduced blood flow to the brain and increased blood flow to the legs due to blood vessel dilation (expansion) instead of contraction, eventually resulting in a temporary ‘fainting episode’.

Standing or physical overexertion for prolonged time periods in high temperatures triggers a cooling mechanism in the body that involves blood vessel dilation, decelerated heart contractions, low blood pressure, and reduced brain oxygen levels, resulting in what is termed as a ‘heat syncope’ that mimics the effects of a ‘fainting spell’. In its mild form, affected individuals usually regain consciousness 10-15 minutes after fainting, with all body functions restored. However, some cases require immediate medical attention in order to avoid a possibly deadly heat stroke.

A heat syncope usually follows two or more of the following symptoms:

Who Can Get It?

Heat syncope can affect anyone regardless of heart health. However, the risk is magnified for those unaccustomed to higher temperatures or hot climates, along with dehydration. Moreover, soldiers standing guard during daytime are also highly susceptible to heat syncope, as even slight movements after long standing periods can contract leg muscles and rush previously pooled blood from the legs to the heart and head, resulting in fainting. The same can be said for construction workers who work during the day.

Since heat syncope can quickly progress into heat stroke or other serious heat-related conditions, quickly raise the patient’s legs to increase blood flow to the brain, move them to a cool, shady place, and check their airways, breathing and blood circulation. Give them water or an electrolytic sports drink as soon as they regain consciousness.

Although heat syncope is fairly common, it may sometimes be a symptom of an underlying cardiovascular, metabolic, or nervous system disorder. Make sure to get properly checked by your physician after suffering from a syncope. You can also book an appointment with a top General Physician in Lahore, Multan and Islamabad through oladoc.com, or call our helpline at 042-3890-0939 for assistance to find the RIGHT Doctor for your health-related concerns.

The Different Ways Asthma is Triggered and How You…