Home » Mental Health » When Food Becomes The Enemy: Eating Disorders And Their Types

When Food Becomes The Enemy: Eating Disorders And Their Types 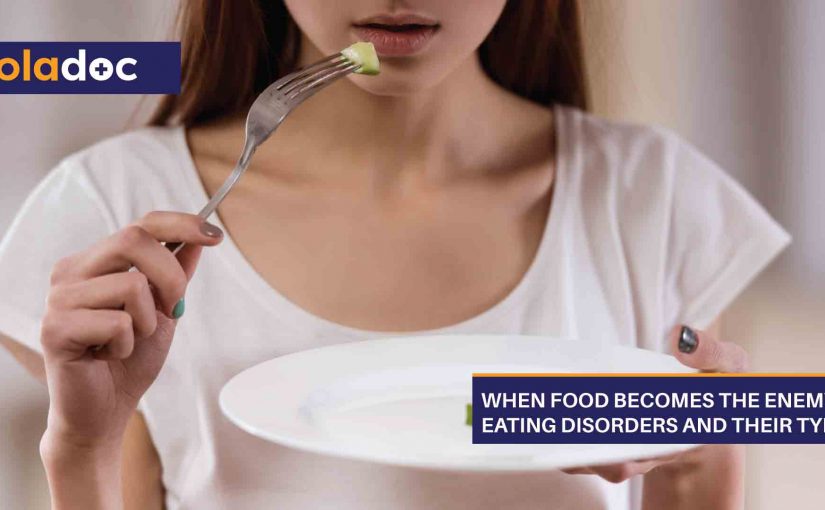 Eating disorders are psychological conditions that involve avoiding food altogether or eating and getting rid of large amounts of food through unhealthy means such as unnecessary laxative use and induced vomiting, and can affect people of both genders at any age across all ethnicities. Those diagnosed with an eating disorder use food as a coping mechanism against anxiety, depression, stress and, above all, low self-esteem. They often isolate themselves, severely damaging their personal relationships and educational / work performance.

Although a majority of sufferers are females between 14-22, contrary to what is commonly depicted in the media-particularly Western media- patients’ come from all economic divisions, with ages ranging between 10-40 and older; and a fourth of those diagnosed are males, according to doctors.

In addition to social causes such as peer pressure and the general ‘slim’ ideal, researchers believe that personality traits like perfectionism, neuroticism (moodiness and extremely negative emotions) and impulsivity might also serve as vital catalysts. Generally most of these are associated with a separate mental disorder that may manifest itself as an eating disorder.

6 of the most common eating disorders are explained below:

The flag-bearer of mental disorders, Anorexia has the highest mortality rate among all mental illnesses. It is characterized by either restricted food intake or ‘binge’ (eating large amounts of food in one sitting) and ‘purge’ cycles  (getting rid of the food eaten through induced vomiting, laxatives, unnecessary exercise or starvation) resulting in patients being severely underweight. This self-starvation can lead to reduced muscle and bone strength, organ failure and fertility issues. Those suffering from this condition have a deep-rooted fear of being overweight. They struggle for social acceptance or maintaining their social position and their personal idea of beauty.

While the ‘binge-purge’ cycle is similar to a category of anorexia, people with bulimia are not underweight; they simply maintain a body-weight and shape that they perceive to be ideal. Like anorexics, bulimics perceive themselves as too fat and strive for social acceptance. However, they periodically experience mood swings and bouts of uncontrolled eating (mostly of foods they try to avoid) which they later compensate for through unhealthy purging. They are secretive about their binges and eating habits around others due to feelings of guilt, shame and anxiety. Untreated bulimia can manifest in bloating, constipation, swelling of the hand and feet and, later, cardiac and digestive diseases.

Both anorexia and bulimia are most common in teens and young adults.

Sufferers of BED eat large amounts of food apart from their regular meals, even when they’re not hungry. This is followed by the usual feelings of guilt and disgust. However, unlike bulimics, binge-eaters do not partake in purging practices. They buy special ‘binge-foods’ (things they enjoy eating, like ice-cream), but these episodes of overeating do not provide pleasure; only stress. Since people identified with BED are largely overweight due to excessive eating and lack of purging, they face a high risk of developing Type 2 diabetes, high blood pressure, cholesterol and heart disease. This condition usually affects middle-aged people as opposed to young adults.

Known previously as Selective Eating Disorder, people suffering from this condition avoid certain foods, disliking their appearance, texture or taste-even fearing them due to a past incident. This results in eliminating entire food groups from their diet and, consequentially, suffer from severe nutritional deficiencies. This disorder does not include those who avoid certain foods for religious reasons.

When someone’s symptoms don’t fit into a pre-defined disorder, they are classified under OSFED. For instance, an anorexic may have ‘normal’ weight, or a bulimia/BED sufferer may experience infrequent binge-purge cycles.

Eating disorders are relatively unknown and left undiagnosed in Pakistan due to the social stigma surrounding mental conditions in general. If you, or someone else around you experience symptoms of any of the above disorders, consult a specialist, or book an appointment with a top Psychologist or Psychiatrist in Lahore, Karachi and Islamabad through oladoc.com, or call our helpline at 042-3890-0939 for assistance to find the RIGHT Doctor for your mental-health issues.


Sadaf Tafseer - Author Dr. Sadaf believes that mental illness is not a choice but recovery is. By following this motto, she considers awareness as the key to recovery from mental illness and thus loves to write about it.
« Migraine: Treatment And Management
Eat It Away: The Best Foods That Prevent Cancer »
Book Appointment with the best "Psychiatrists"