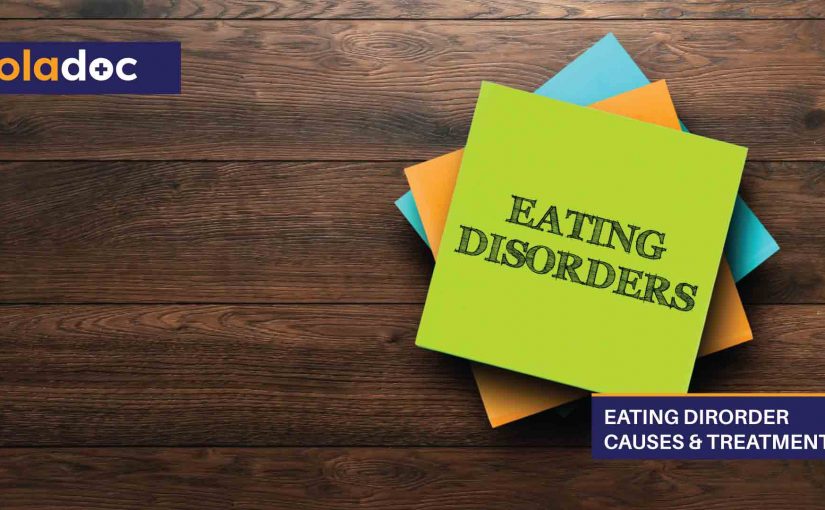 What is Eating Disorder?

Eating disorders are a range of psychological conditions that cause unhealthy eating habits to develop. In most cases, they start as an obsession with food, body weight, or body shape and continue to develop into dangerous eating behaviors that harm your health, emotions as well as ability to function in other areas of life.

Eating disorders are much more complex than having trouble balancing your food intake. These disorders are described in the American Psychiatric Association’s Diagnostic and Statistical Manual of Mental Disorders, fifth edition (DSM-5) as complex mental health conditions that often require the intervention of medical & psychological experts to alter their course.

These behaviors can significantly impact your body’s ability to get appropriate nutrition and can harm the heart, digestive system, bones, teeth & mouth, ultimately leading to other more severe diseases.

Eating disorders often develop in teen & young adult years, although they can develop at any stage in life. With treatment, you can return to healthier eating habits and sometimes reverse serious complications caused by eating disorders.

Signs & symptoms of an eating disorder depend upon the relevant type of disorder, age of the patient and any underlying medical health condition, etc. Different people may experience different symptoms due to a variety of reasons but the most commonly found signs & symptoms include:

The most common types of Eating Disorders are as follows:

People suffering from anorexia nervosa will typically have an obsessive fear of gaining weight, refusal to maintain healthy body weight, and an unrealistic perception of body image. Many people with anorexia nervosa will fiercely limit the quantity of food they consume and view themselves as overweight, even when they are underweight.

Anorexia can have damaging health effects, such as brain damage, multi-organ failure, bone loss, heart difficulties, and infertility. The risk of death is highest in individuals with this disease.

Bulimia is characterized by repeated binge eating followed by behaviors that compensate for overeating, such as forced vomiting, excessive exercise, or extreme use of laxatives or diuretics.

Men & women who suffer from Bulimia may fear weight gain and feel severely unhappy with their body size & shape. The binge-eating and purging cycle is typically done in secret, creating feelings of shame, guilt, and lack of control. Bulimia can have injuring effects, such as gastrointestinal problems, severe dehydration, and heart difficulties resulting from an electrolyte imbalance.

Individuals who suffer from Binge Eating Disorder will frequently lose control over his or her eating. Different from bulimia nervosa however, episodes of binge-eating are not followed by compensatory behaviors, such as purging, fasting, or excessive exercise.

Many people suffering from BED may be obese and at an increased risk of developing other conditions, such as cardiovascular disease. Men & women who struggle with this disorder may also experience intense feelings of guilt, distress, and embarrassment related to their binge-eating, which could influence the further progression of the eating disorder.

Other less common types include:

It is the repetitive & persistent regurgitating of food after eating, but it’s not due to a medical condition or another eating disorder such as anorexia, bulimia, or binge-eating disorder.

Food is brought back up into the mouth without nausea or gagging, and regurgitation may not be intentional. Sometimes regurgitated food is rechewed and swallowed or spit out.

The disorder may result in malnutrition if the food is spat out or if the person eats significantly less to prevent the behavior. The occurrence of rumination disorder may be more common in people who have an intellectual disability

This disorder is characterized by failing to meet the minimum daily nutrition requirements because you don’t have an interest in eating or avoid food with certain sensory characteristics, such as color, texture, smell, or taste; or you’re concerned about the consequences of eating, such as fear of choking.

Avoidance of food is not because of the fear of gaining weight, although the person may suffer from significant weight loss or failure to gain weight in childhood, as well as nutritional deficiencies that can cause health problems.

Pica is an eating disorder in which a person repeatedly eats things that are not food and have no nutritional value. The behavior persists over for at least one month and is severe enough to warrant clinical attention.

Individuals with pica do not typically have an aversion to food in general. A person diagnosed with pica is at risk for potential intestinal blockages or toxic effects of substances consumed.

Treatment for pica involves testing for nutritional deficiencies and addressing them if needed. Behavior interventions used to treat pica may include redirecting the individual from the nonfood items and rewarding them for setting aside or avoiding nonfood items.

The term used for an individual who displays eating disorder symptoms but does not reach the threshold for clinical diagnosis. Examples may include a person with all the symptoms of anorexia nervosa but without low body weight, or a person with the symptoms of bulimia who does not binge, and purge as frequently as expected.

Eating Disorders are caused by a variety of reasons and so many different factors come into play such as psychological, cultural, or social aspects that may lead a person to develop such unusual eating habits.

Eating disorders are often associated with preoccupations with food, weight, shape, or with anxiety about eating or the consequences of eating certain foods.

Behaviors associated with eating disorders include restrictive eating or avoidance of certain foods, binge eating, purging by vomiting or laxative misuse, or compulsive exercise. These behaviors can become driven in ways that appear similar to an addiction.

Evidence suggests that genes & heritability also play a part in why some people are at higher risk for an eating disorder, but these disorders can also afflict those with no family history of the condition.

Over the past 20 years, research on eating disorders has increased exponentially, with considerable focus on treatment and prevention. Once thought to be disorders of choice, based on sociocultural influences, it is now well established that genetic factors significantly contribute to the etiology of eating disorders.

Treatment should address psychological, behavioral, nutritional & other medical complications. Ambivalence towards treatment, denial of a problem with eating and weight, or anxiety about changing eating patterns is not uncommon. With proper medical care, however, those with eating disorders can resume healthy eating habits, and recover their emotional & psychological health.

Eating disorders affect all types of people. However certain risk factors put some people at greater risk for developing an eating disorder.

Some eating disorders are likely to trigger by stressful life events, such as a loss or trauma; relationship difficulties; physical illness; or a major life change such as entering one’s teens, starting college, marriage, or pregnancy.

Women & girls are more likely to have a diagnosed eating disorder. Although, It is important to acknowledge that men & young boys in most scenarios remain under-diagnosed due to differences in seeking treatment.

Dieting, when done in extreme measures & without expert counseling or proper management can lead one to develop unhealthy eating habits.

Eating disorders are relatively more common among teens and people in their early 20s due to various hormonal & physical changes. Teenagers are at a higher risk of developing an eating disorder due to different social or psychological reasons

Eating disorders are especially common among gymnasts, runners, wrestlers, and dancers as these people are very much cautious about their physical appearance & diet, which in extreme cases turns into anxiety, causing them to develop unhealthy habits such as eating too much or too little at times.

Increasingly, we understand eating disorders as not just psychological problems but as disorders of learning & habit. Changing established habits can feel challenging, however, the practice of healthy eating behavior under expert therapeutic guidance helps develop skills needed to manage anxieties regarding food, weight, and shape,  all of which fade over time with the gradual achievement of mastery over recovery.

A variety of techniques assist in managing eating disorder and vary depending on the specific type of disorder, moreover tailored around the specific needs of an individual, but will generally include the following:

Psychotherapy, such as talk therapy or behavioral therapy effectively treats the disorder while providing the patient with a sense of confidence. Your health care professional will thoroughly assess the situation and make the decision of assisting you with solo, group or family therapy, based on your needs.

This technique aims on providing support to the patient with medical care & monitoring, enabling them to control their emotions & balance their diet while also managing their weight in the appropriate way.

This treatment method focuses on the nutritional counseling of the patient. Your nutritionist will examine your condition & develop a nutrition management plan to help improve your overall health.

The best treatment method for your specific requirements will be specified by your health specialist after a proper diagnosis of your condition. Finding a healthcare expert in Pakistan can be tricky and people often face serious consequences due to the unavailability of proper guidance & counseling.

Oladoc has made the job easy for you. In order to book an appointment with the top-rated health care specialists in Pakistan, make sure to use Oladoc and avail upto 50 percent discount on your appointments.

Disclaimer: The contents of this article are intended to raise awareness about common health issues and should not be viewed as sound medical advice for your specific condition. You should always consult with a licensed medical practitioner prior to following any suggestions outlined in this article or adopting any treatment protocol based on the contents of this article.
« Breast Cancer Cures Available in Pakistan
Everything you need to know about Augmentin in Pakistan »
Book Appointment with the best "Nutritionists"